This website is not compatible with Internet Explorer. Some features might not work correctly in this browser

We recommend that you use the latest version of Chrome, Firefox, Microsoft Edge, or Safari for the best browser experience.

Craig and Shaun Phelan went home from Cambridge Jockey Club’s Wednesday meeting happy men after recording a double on the synthetic track, which was officially opened by former Racing Minister Winston Peters earlier in the day. 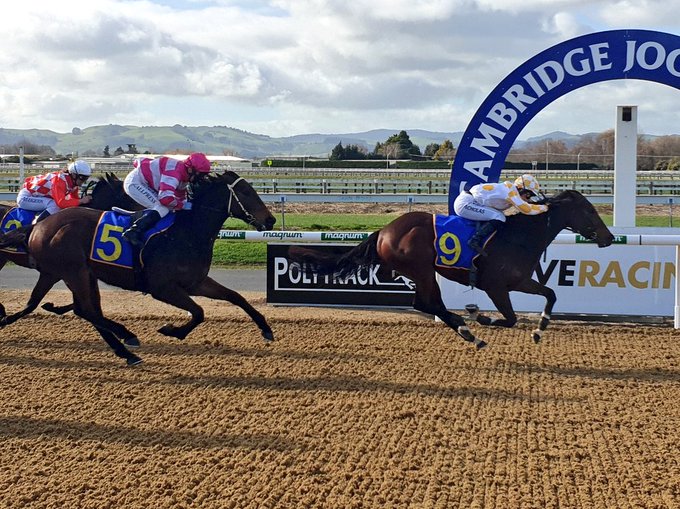 She previously had two starts on the track for two placings and her trainers were delighted she was able to break her maiden in the $40,000 race.

“Her form suggested that she was going to peak, so you might as well peak in a $40,000 race,” Craig Phelan said.

Her connections have taken a patient approach with her since buying her online and Phelan said they are now reaping the rewards.

“The boys bought her off gavelhouse and time ticks by and we are great believers in our stable that you have got to give them a bit of time, that’s the best thing for a horse,” Phelan said.

While all three of Night ‘N’ Vegas’s runs have been on Cambridge’s polytrack surface, Phelan believes her form will transition onto the turf.

Later on the card stablemate Hit The Road Jack secured the stable double when winning the Martin Collins New Zealand 2000 by 1-1/4 lengths over Alamode (NZ) (Alamosa), with Heart Of A Lion (NZ) (Niagara) a half-length back in third.

It was the second consecutive win for the gelding and Phelan said the rising five-year-old has finally figured out what racing is about.

“We thought last time that the penny had dropped and that was proven today,” he said.

“He will progress into some of the staying races. He is a typical Jakkalberry and has just needed time. I can see him going on to bigger and better things.”

Hit The Road Jack was also ridden by Nicholas, who is in a purple patch of form at the moment.

“Elen is on fire,” Phelan said. “She just gets out there and does her job.”

View All
Racing
Sakura Blossom enhances her blossoming reputation
Ben Foote trained Sakura Blossom enhanced her blossoming reputation with an exceptional performance and remain unbeaten
Racing
Trackwork Thursday 16 September
MUSTANG VALLEY could be one for odds at Hastings this weekend after returning easy but nice work this morning.
Racing
Trackwork Tuesday 14 September
EL VENCEDOR got through the heavy conditions nicely when working on the No.4 grass.